A Closer Look At a Homeless Camp Clean Up 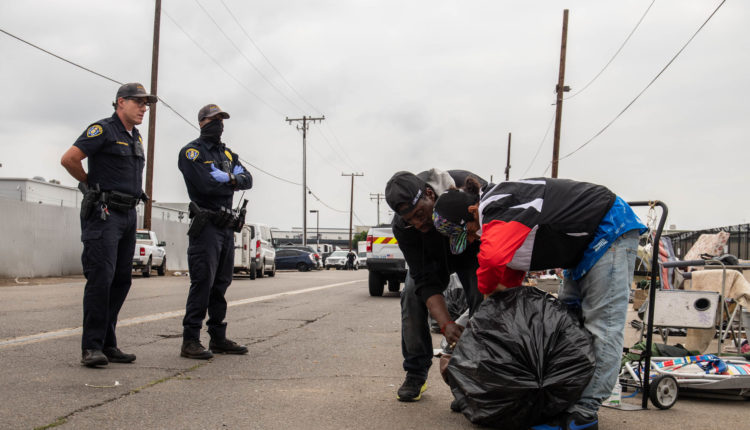 For years, the clearings of homeless camps in the city have sparked controversy as more and more tents have appeared in the city.

VOSD’s Adriana Heldiz witnessed a large-scale city operation on Tuesday to clean up a homeless camp in Midway District, which has been growing for months.

A city spokeswoman told Lisa Halverstadt that Tuesday’s cleanup, which also continued on Wednesday, followed numerous complaints. Last week, spokeswoman Ashley Bailey said, part of the camp spilled out onto the road next to a shopping center in Midway.

Homeless residents and lawyers expressed concerns about the two-day operation, including the fact that homeless residents were given just three hours’ notice of the cleanup on Tuesday and Wednesday. An attorney who negotiated a past settlement dictating homeless camp clearing policies suggested the notice was insufficient given the lack of available city-funded storage for homeless San Diegans in Midway.

Bailey stressed that homeless residents were offered shelter for days before the operation, which she said followed concerns about the public health and safety risks associated with the camp.

Click here to view Heldiz’s photo essay from the cleanup.

Qualcomm has built a smart campus

NBA Hall of Famer Magic Johnson attended a conference this week hosted by Qualcomm to tout the benefits of using technology in urban centers. Johnson, co-founder of an investment and wealth management company, spoke about the need to close the digital divide.

That’s not surprising. The really interesting quotes in this Union-Tribune article about the conference came from a Qualcomm executive who identified roads and other public goods as opportunities for monetization. “We use the technology to solve a problem and that can be monetized by the city so that it can be sustained over a period of time,” he said.

At its own campus in Sorrento Mesa, Qualcomm has rolled out a smart street lighting system and other technologies.

Reminder: San Diego’s smart street lighting system hasn’t worked very well. The devices became an exclusive tool for the police. And the last time we checked, the cameras were still recording, even though the officials ordered the program to be halted.

Note: One of our panels at Politifest next month will take a closer look at the promises and realities of smart technology – why it’s so attractive to governments and the risks of abuse.

Reader David Peery emailed us to confirm that city officials have installed a new crosswalk on the western side of Balboa Park, at 6th Avenue and Nutmeg Street.

But, as Peery points out, adding the crosswalk means a change in philosophy for the city. In 2011, we wrote about changes to pedestrian accessories on 6th Ave. and the city was not fond of zebra crossings at the time.

Bill Harris, a spokesperson for the traffic department, said the city’s decision not to use crosswalks was a conscious one, based on traffic engineers’ belief that painting them at those intersections — which have no stop signs or traffic lights — would prevent crossing the road. even more dangerous,” we wrote at the time.

Millions of dollars remain available for rent reduction for Chula Vista residents as the eviction moratorium ends. (Union Tribune) San Diego Mayor Todd Gloria was in Washington, DC, to talk to officials about homelessness, infrastructure, pollution and the lifting of non-essential travel restrictions at the US-Mexico border. (KPBS) Hats off to our buddy Sara Libby who pointed out that the San Diego Sheriff’s Department featured in this New Republic article about police across the country claiming to have overdosed on fentanyl merely for handling the drug. A Carlsbad and three restaurants in San Diego have been awarded Michelin stars. (San Diego times)

The Morning Report was written by Lisa Halverstadt, Will Huntsberry and Jesse Marx, and edited by Megan Wood.