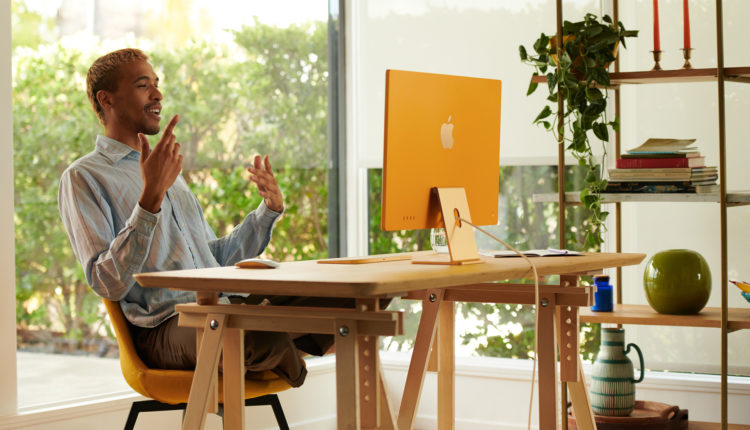 Apple unveiled its new iMac at its product event on April 20, 2021. Image: Apple

Apple (AAPL) took the wraps off its latest iMac all-in-one desktops at its virtual “Spring Loaded” product event on Tuesday, April 20. The event was hosted from the company’s headquarters in Cupertino, California. latest high-end iPad Pros, along with a new AirTag device for tracking items such as lost keys.

Apple says the new iMac is built from the ground up around the company’s ARM-based M1 chip and is more powerful than ever. The all-in-one, starting at $ 1,299 and available for pre-order on April 30, is a ridiculous 11.5 millimeters thick, has a 24-inch Retina display, and comes in 7 different colors. A single pane of glass covers the entire iMac’s front bezel, while the back is given bold bold colors, with matching Apple logos.

Apple says the M1 chip has been instrumental in ensuring the new iMac is so thin, something the company says it couldn’t do with Intel’s (INTC) chips. The new iMacs, the company says, are also quiet, at just 10 decibels, thanks to the more efficient processor.

In X Code, Lightroom, and iMovie, the M1 chip is 85% faster than the previous Intel version of the Mac. In Photoshop, the iMac’s graphics processing unit is up to 2 times faster. Since the iMac and iPhone now use a similar chip architecture, you can also run iOS apps on the all-in-one.

The best camera ever in a Mac

The iMac also gets a new, larger 1080p camera for better overall image quality. The M1 chip also provides the camera with image processing software to increase the color and dynamic range of your video. Apple says it’s the best camera ever in a Mac. In addition to the camera, the iMac gets an array with 3 microphones and more powerful speakers with two woofers and a powerful tweeter on each side.

It also has up to 4 USB-C ports, including two Thunderbolt ports. In addition, it supports up to a 6K screen, as well as a new magnetic power connector with a woven cable that leads to a power adapter. Your ethernet cable connects to the power adapter to keep your desk less cluttered.

There’s a new Magic Keyboard that’s color-matched to your iMac with a built-in Touch ID fingerprint scanner. Of course you can also get a Magic Mouse and Magic Trackpad in matching color.

The iMac is the fourth Mac in Apple’s lineup to get the company’s ARM-based M1 chip. The company previously unveiled a MacBook Air, MacBook Pro and Mac mini with the M1.

How to Build Better Learning Machines