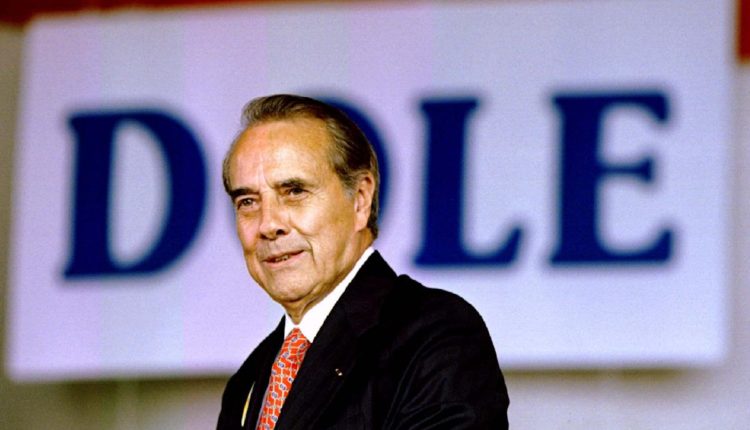 Bob Dole, a former Senate majority leader who unsuccessfully ran for president against Bill Clinton, died Sunday. He was 98 years old. He leaves behind his wife Elizabeth Dole, who was also a U.S. Senator, and a daughter, Robin, from a previous marriage.

One of the behemoths of American politics in the 20th century, Dole will be remembered for his heroism in World War II, his time as Senate majority leader, running for president in 1996, and even his unlikely role in a commercial for the maker of Viagra.

But perhaps two of his most lasting legacies from American life came earlier in his nearly 50-year career in public office. As a US senator, Dole has been at the center of deals over the Social Security program and food stamps (now known as SNAP) that have left a lasting impression on the way Americans interact with these two programs.

In his memoir, “One Soldier’s Story,” Dole wrote that when asked about the Senate achievements he is most proud of, his “answer sometimes surprises people” — he cited Social Security as his number one answer besides passing of the Americans with Disabilities Act, a civil rights law that prevents discrimination based on disability.

Dole was one of the few traditional Republican elders to endorse Donald Trump during the former president’s 2016 run. He backed Trump again in 2020, then in a 2021 interview — marking his 98th birthday — Dole confirmed his support for USA Today, but added, “I’m kind of Trumped out, though.” Dole also said, “I believe we’ve lost something” when it came to political discourse compared to his tenure.

Celebrating a leadership series that the Center named after Dole and his wife, BPC President Jason Grumet commented in 2019: “Bob and Elizabeth Dole’s exemplary careers show it’s possible to be a proud partisan while building coalitions that make our country all the better.”

‘Another attempt’ at Social Security

In 1981, President Ronald Reagan asked Dole — then chairman of the Senate Finance Committee — to serve on a new “National Commission on Social Security Reform.”

The problem the group faced was huge, as the retirement security program, many feared, was headed for financial ruin. In 1983, after more than a year of stalemate, Senator Dole led a last-ditch effort to find a deal. He passed and eventually worked out a bill with Democratic Senator Daniel Patrick Moynihan of New York.

The resulting legislation reformed the program by raising the payroll tax rate, adding more workers to the system, and slowly raising the age of benefits.

President Ronald Reagan signs the amendment to the Social Security Act with Dole (2nd of l), present as a witness. (CORBIS/Corbis via Getty Images)

Political historian Matthew Dallek wrote in US News & World Report in 2009 that the law “cemented a prevailing political consensus on Social Security” — that it could not be erased. Just a few years earlier, Reagan had criticized the program and even suggested it was voluntary.

When signing the bill in 1983, Reagan said, “Today we can all look each other in the eye and say, ‘We kept our promises.’

Years after the 1983 deal was signed, including his 1996 speech accepting the Republican nomination, Dole was able to claim that he had “saved” Social Security.

Certainly, Social Security is far from guaranteed for future generations. The program is currently facing a potential funding gap – which could be as early as the end of the decade – and would likely take the form of cuts in benefits across the board. In 1983, however, the prospect of a financing gap was measured in months.

A Bill to ‘Significantly Change the Food Stamp Program’

The food stamp program is another facet of American life that Bob Dole has left a significant mark on, although it had been around for decades when he became deeply involved in the late 1970s.

He had long worked closely on agricultural policy, a top priority for his Kansas voters, and the two issues are often linked in legislation.

Dole found an unlikely ally in South Dakota liberal Senator George McGovern, and they struck a deal that significantly reformed the program. They worked with a group of senators, including Hubert Humphrey of Minnesota, to address issues such as purchase requirements that prevented some poor people from affording the program.

The purchase requirement was a controversial issue, Bill Hoagland, who has worked with Senator Dole in many capacities over the years, told Yahoo Finance. Hoagland, who at one point worked as an administrator for the Department of Agriculture’s Food and Beverage Service, recalls “they had buttons on the mound we wore” and called for an end to the purchase requirement.

The final bill abolished the requirement and also reflected key Republican priorities by encouraging work. It tightened entry requirements by punishing people who voluntarily quit their jobs and then applied to the program, as well as expelling some students from the program.

In January 1979, the program abolished the purchase requirements that people actually buy stamps, and participation increased by 1.5 million that month. “It was a big deal,” Hoagland recalled of the deal being struck. The deal ensured that the program remained “the only universal assistance program for low-income families,” he said.

There is clearly less bipartisan collaboration these days. “You have to realize it was a very different Senate,” Hoagland said. It probably helped that Dole had a special status because of his wartime past and reputation as a pragmatist, according to Hoagland.

Dole and McGovern worked together across the aisle on food security for decades, though they were on the other end of the spectrum on most issues. In 2008, they became co-recipients of the World Food Prize for their work in establishing the McGovern-Dole Food for Education program, which provides meals to school-age children around the world.

In 2008, in an effort to fight stigma, the program changed its name to the Supplemental Nutrition Assistance Program, or SNAP. Otherwise, the program has continued and has become an important lifeline for many families during the coronavirus pandemic. In one of his first acts of office, President Joe Biden signed an executive order to encourage more federal food aid through the program.

Dole leaves behind a wide variety of other legacies. From 1985 to 1996, he was the Senate or Minority Leader for over ten years. During that time, he was key to enacting the Americans with Disabilities Act in 1990, helping to defeat President Bill Clinton’s health care plan several times. years later.

Senator Dole, left, during a presidential debate against President Bill Clinton on October 6, 1996.

He also unsuccessfully ran for vice president in 1976 and then ran for the top job in 1980 and 1988 before finally taking home the nomination in 1996. Dole also became widely known after retiring after his 1996 loss to Bill. Clinton, for his appearances in television commercials.

His spot for drugmaker Pfizer (PFE), the maker of Viagra, urged men to seek help for erectile dysfunction in 1998. He also filmed multiple ads for Pepsi, appearing alongside Britney Spears in one and referencing his Viagra spot in another. Lastly, he spoke of his “faithful little blue friend” before revealing that he was talking about a can of Pepsi (PEP).

He wrote in his book that he later learned after appearing in an ad for Visa (V) that “more people saw me in that one TV commercial during the Super Bowl than the number who saw Clinton’s presidential inauguration.”

In 2016, Dole supported former President Donald Trump while other former Republican presidential candidates kept their distance. In 2020, he said the committee overseeing the presidential debates was biased against Trump during his match against Biden.

Nevertheless, shortly after announcing that he had been diagnosed with stage 4 lung cancer, Biden visited Dole to offer his support on Feb. 20. In the past, Biden, who served in the Senate alongside Dole, called the Republican a “close friend.” ”

Ben Werschkul is a writer and producer for Yahoo Finance in Washington, DC.

Qualcomm Inc. stock outperforms competitors despite losses on the day