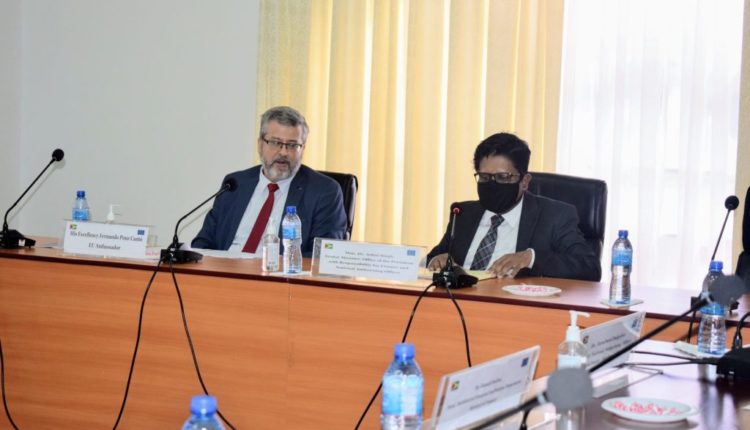 See the following joint press release from the Ministry of Finance and the Delegation of the European Union in Guyana:

The meeting was a successful step towards further cooperation results for the benefit of Guyana’s citizens, with discussions focused on the EU’s development cooperation program with Guyana. The EU and Guyana have an ever closer partnership, based on common values, objectives and interests covering all matters of mutual interest.

Addressing the meeting, Minister Singh mentioned the government’s strong appreciation for the EU’s continued support to Guyana over the years. He also expressed his optimism that the strong relationship between Guyana and the EU will continue to grow in the coming years as Guyana moves through this new phase in its economic history.

Ambassador Fernando Ponz Cantó pledged the European Union’s continued commitment to the EU-Guyana partnership as Guyana continues its development agenda as a new and emerging oil and gas producer.

Senior Minister in the Office of the President with responsibility for Finance Dr. Ashni Singh with European Union (EU) Ambassador to Guyana Dr. Fernando Ponz Cantó meeting with other stakeholders (Photo: Ministry of Finance)

The ambassador recalled the determination and resilience of the Guyanese people to uphold democratic standards and the rule of law. In particular, he commended the Government and the National Authorizing Officer (NAO) for restoring this bilateral policy dialogue, which had been absent in 2020 due to the political crisis and related events, and which is a fundamental element in the full normalization of cooperation including budget support.

Minister Singh then reaffirmed the government’s appreciation of the EU budget support programme.

The two delegations held extensive discussions focusing on the government’s ongoing investment program in the marine and river defense sector, including mangroves. Both have been important areas that have supported EU support in recent decades.

In addition, Dr. Ashni Singh and the EU Ambassador held a preliminary discussion on a new €2.73 million technical cooperation facility, in which Guyana will benefit from support for the implementation and development of policies to mitigate the impact of the COVID-19 pandemic. Potential areas of support include health, livelihood development, biodiversity, forestry, governance and public finance management.

The EU Delegation to Guyana was established in December 1972 and is responsible for promoting the EU-Guyana partnership, including political, development and socio-economic relations, trade and other key policies, based on solid human, cultural and historical ties.