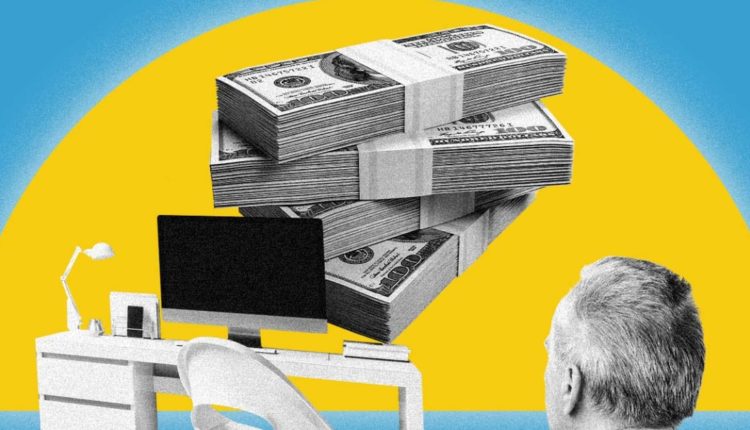 After more than a decade of retirement, Gregory Boulware returned to work in 2020.

Boulware, 69, had been a truck driver for about 30 years and spent long hours on the road, away from his Pennsylvania home and his wife and children, to earn a living and put aside some savings. His body began to suffer from the effects of years on the road, and he began to worry that the lingering back aches and pains would worsen. So he went back to school and received his associate’s degree in management and information technology in 2007, but could only find temporary work. In 2008 he retired.

When he retired, he started writing books, “that don’t make money,” he said with a laugh, but he had retirement savings, started collecting Social Security at age 59, and had a plan. But then he and his wife bought a house.

“When we lived in an apartment, we did fine because we could easily afford it, but every year the rent went up,” said Boulware. “I woke up one day and said, ‘You know, these people can tell us to leave, and the next hour we have nowhere to go.'”

The house they bought with their savings led to fear of losing the house, every mortgage payment a challenge, sometimes with other expenses like food and gas to make ends meet. Boulware decided he had to get back to work. He enrolled in a job training program for low-income adults through the Senior Community Service Employment Program (SCSEP), a community service and job-based training program for older workers authorized by the Older Americans Act, and was hired last month for an administrative position.

“Retiring doesn’t mean what it used to be,” said Nora Dowd Eisenhower, executive director of the Philadelphia Mayor’s Commission on Aging.

Higher rents, higher food prices and longer life spans often create financial challenges for many Americans, leading to job searches after retirement. More people have returned to work after retirement, and there has been a steady increase in recent months.

According to Emma Aguila, an economist and associate professor at the University of Southern California’s Sol Price School of Public Policy, this continues the trend of older people viewing retirement as a temporary phase, lasting until a financial need arises.

In October, the unemployment rate was 2.6 percent, above the rate of 2.5 percent for September and 2.4 percent in August, a steady increase, according to an analysis of data from the Current Population Survey (a U.S. Census household survey). Bureau and the US Bureau of Labor Statistics) by Nick Bunker, director of economic research for North America at the job site Indeed.

Bunker said his analysis doesn’t address the reasons for the rise and survey data showed pandemic job losses and a more viable job market could be a factor. But other experts said the rise, which is partly caused by the early job losses from the pandemic, could also be caused by financial distress among older Americans.

Tracey Gronniger, the lead attorney for the nonprofit Justice in Aging’s economic security team, said many seniors who don’t live in poverty “on paper” may be struggling, especially if they need health care or support services.

“I think older people are a little bit forgotten sometimes,” she said. “And some have to figure out how to use services they didn’t have to use before. And that could take a toll on their income.”

Even if people have access to pensions and other resources, their savings are not always enough to get ahead for 20, 30 or 40 years as the cost of living continues to rise. The national median rent increased by 11.4 percent in 2021, compared to the 3.3 percent increase at the start of 2017, 2018 and 2019. The United Nations food price index, which tracks the prices of raw materials in food production, rose this fall by 30 percent . While Social Security and Supplemental Income (SSI) benefits will increase 5.9 percent in 2022, Medicare Plan B premiums will also increase, from $148.50 in 2021 to $170.10 in 2022.

Bob Krasner quit his job as an agent at the Bay Area Rapid Transit station in March. But less than a year after retiring, he returned to work for the Independent Transportation Network, a senior driving service, to secure his future savings in case his health deteriorates.

Krasner, 67, delivers meals to people who have difficulty getting around. While a major factor in his decision to return to work, he said he was “bored to tears” and missing out on regular interaction with people, he also said earning the extra “shopping money” would help his to keep savings.

“We can save my pension and Social Security, and Social Security and my wife’s salary, but going back to work gives us the freedom not to have to look at the price tag on everything we buy,” he said. . “We can go to the store, and we can get what we want without worrying about it breaking the budget.”

Not retiring to fill the gaps left by retirement income and savings is not uncommon, said Susan Weinstock, vice president of AARP’s financial resilience programming.

“There are people who may be retiring, try that for a while, but now the money is running out, and they look at their retirement savings and there isn’t enough,” she said. “So people have to go back to work to make ends meet.”

The financial need is especially high among low-income workers and people of color, especially blacks and Hispanics, who may not be able to get by on just Social Security and savings after retirement. In addition, major life events, such as buying a house or unforeseen medical costs, can cause a person to return to work, Aguila said.

“Low incomes and minorities do not reach retirement on the same terms as those with higher incomes,” she said. “[Higher income people] not only have access to social security, but also to private pensions and other resources.”

And planning for the future, Krasner said, is a wise move for anyone when unexpected misfortune can happen at any time. His children and grandchildren regularly gather at the house he and his wife own during the holidays, and he doesn’t want to lose what he has now.

“Do I see a time when I will no longer be able to maintain my own home? It could happen,” he said. “That part of the future is kind of vague, you know. Age is catching up with everyone, even if we don’t want to admit it or even think about it.”

3 Reasons to Buy Qualcomm Stock Near Its All-Time High