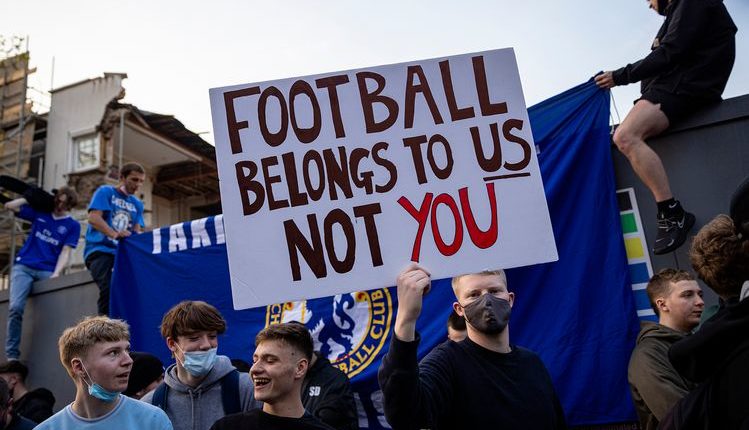 JPMorgan has broken its silence on its support of the now stifled Super League that sparked outrage among football fans across Europe and collapsed within days, saying it “misjudged the deal” and will learn lessons from the incident.

The US investment bank was the sole financier of the breakout league, where a select group of 12 major brand football teams were promised hundreds of millions of pounds to compete. The bank agreed to underwrite the competition with a € 3.25 billion loan, with each member receiving an initial payment of between € 200 million and € 300 million.

“We clearly misjudged how this deal would be viewed by the wider football community and how it could affect them in the future,” a JPMorgan spokesperson said in a statement. “We will learn from this.”

The six English clubs – including Manchester United, Manchester City and Liverpool that had joined the league – withdrew within hours of each other on April 20 after widespread outrage from fans, protests from players, condemnation by governments and UEFA, the governing body of sport in Europe. Plans for the competition collapsed within two days of being announced on April 18.

The collapse of the Super League is a reputational damage to JPMorgan, which is about to launch a new digital bank in the UK, away from its home market in the US. A reputation risk committee at her investment bank that approved potentially controversial transactions reportedly signed the loan.

The British football teams that made up the now-collapsed European Super League are Manchester United, Liverpool, Chelsea, Manchester City, Arsenal and Tottenham.

“We expected this to be emotional,” Daniel Pinto, JPMorgan’s CEO of corporate and investment banking, told Bloomberg on April 20. “We have arranged a loan for a client. It is not up to us to determine the optimal way for football to operate in Europe and the UK. “

In his annual shareholder letter earlier this month, JPMorgan’s CEO wrote about the bank’s role in interacting with the communities in which it operates. “We have long championed the vital role of banking in a community – a potential to bring people together, empower companies and individuals to achieve their dreams.”

But Super League critics said it neglected fans and prioritized winnings for the world’s richest clubs.

A leaked plan reported by the Financial Times said the Super League could generate € 4 billion per season from worldwide broadcasting and sponsorship rights, most of which would go to 15 ‘founding clubs’, which would increase their position in the league. for at least five years regardless of performance.

This isn’t the first time JPMorgan has felt the wrath of football fans. It advised on Glazer’s takeover of Manchester United in 2005, prompting fans of the club to protest outside the UK offices. Edward Woodward worked at the bank when he advised on the deal and later became Manchester United chairman. He stepped down from his position this week after criticizing the club’s decision to join the Super League.