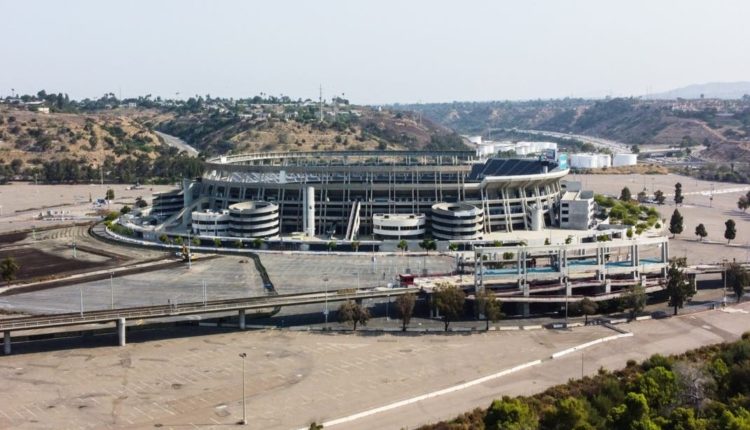 It’s about time the city of San Diego changed the name Qualcomm Way in Mission Valley to something other than the name of a stadium that has been reduced to rubble.

The name is ridiculous. The stretch of road named after the Fortune 500 company Qualcomm doesn’t lead to it in the first place. The company is based in Sorrento Valley. It has to go. And the options for a new, more appropriate name are many:

Boo Chargers Circle San Diego Super Chargers Forever Freeway… (Drive past it plays the old fight song. That would be cool. And we’ve got the technology.) Dean Spanos is a greedy, bloodsucking POS who has all his wealth inherited Avenue… (It should be a big sign.) Bambi Boulevard? (Only diehard San Diego Charger fans will get those.)

Qualcomm Way, an exit from Interstate 8, used to be called Stadium Way when times were simpler. It led to a stadium, which was actually called San Diego Stadium when it was built in 1967. A few years later, the name was changed to Jack Murphy Stadium in honor of a local sportswriter who supported its construction.

But there was no money in that deal. In another time, stadium names honored local figures or our country’s army – for free. Soldier Field in Chicago is an example.

But soon someone found out that you could make money by selling the name rights. So that led to all kinds of stupid stadium names, the latest being SoFi Stadium in Inglewood, which the Chargers rent. (That’s a small shot there.)

Well, that’s what happened to the Murph, which fans quickly referred to as the San Diego Stadium. It went to the dustbins of history when Qualcomm bought the naming rights to the stadium for $18 million in 1997. That was done to help pay for a $78 million expansion that, according to the Chargers, soon proved totally inadequate and demanded a new stadium.

Going to Hell NFL Avenue, maybe? Do you take Super Bowls and slide them where the sun don’t shine Speedway? Mocking is the dumbest punishment ever on a highway

Anyway, as part of the deal, the city also changed the name of the exit to Qualcomm Way. Qualcomm was probably elated because it paid all that money for the naming of a stadium that soon became known as “The Q.” Fans call stadiums what they want. At least the name of the highway exit has not been shortened.

When the naming rights expired in 2017, the exit was not changed back to Stadium Way. So Qualcomm is probably getting free ads. I’m not saying it’s the only reason, but it could be one of the reasons the company has seen chip sales rise 56 percent year-over-year.

That’s a pretty popular exit after all. Condos and condos are going up all over Mission Valley.

Curiously, the exit’s name was not changed after the Chargers left for Los Angeles or even after the city sold the naming rights to San Diego County Credit Union, and the stadium was renamed SDCCU Stadium in 2017.

One problem is that it is not easy to change a street name. Check out the San Diego Municipal Code on this. It’s Chapter 12: Land Development Assessments. It’s Article Five: Subdivision Procedures. It’s Division 11: naming or renaming public streets and other rights of way.

First of all, you need approval from the city engineer, whoever that is. For that, you must first petition for the name change to all property owners along the street. If 100 percent approves, we’re good.

However, if you get less than that 100 percent, you’ll need city council approval. Not only should the name be deemed appropriate, it cannot “adversely affect” first responders and the postal service.

The good news is that there isn’t much development along Qualcomm Way. Google Maps shows few affected companies. But will they go with a new name?

Can Mayor Todd Gloria intervene? Well, he once told me at a fundraiser event, when he was running for mayor, that he wasn’t much of a sports fan. While he was interim mayor, he bet the mayor of Denver on a playoff game between the Chargers and Broncos.

The Bolts were nine-point dogs on the road. Yes, the Chargers lost. I’m just glad he’s betting on Mexican food and not a year’s worth of parking meter revenue. If he were a shark, he’d bet on that Ash Street building and hope to lose.

There is a sense of urgency when it comes to the name change. San Diego State University is now the steward of the Mission Valley grounds and is building a stadium to replace what we should call the former stadium.

If they lobby for Aztec’s Way, for example, it can lead to problems. The Cleveland Indians, for example, will soon be called Cleveland Guardians after a national reckoning of racist names and symbols used across the country. The Washington Redskins are now the Washington Football Team.

One report, by VenuesNow, has Snapdragon, a division of Qualcomm, buying the naming rights. SDSU has not confirmed this, however.

Their basketball arena? In 2009, it sold the naming rights to the Viejas Band of Kumeyaay Indians for nearly $7 million.

I contacted the college and a spokesperson said a name change for Qualcomm Way “is not up for discussion at this time”.

I think we should do something to honor the Chargers. They had been here for over 50 years. And they made one Super Bowl.

And what else in Mission Valley is cool to name it after?

Voice of San Diego is a non-profit news organization supported by our members. We reveal why things are the way they are, uncover facts that those in power may not want and explain complex local policy issues so you can be involved and make good decisions. Sign up for our newsletters at voiceofsandiego.org/newsletters/.

Finance expert outlines ways to save on your holiday shopping – WFSB