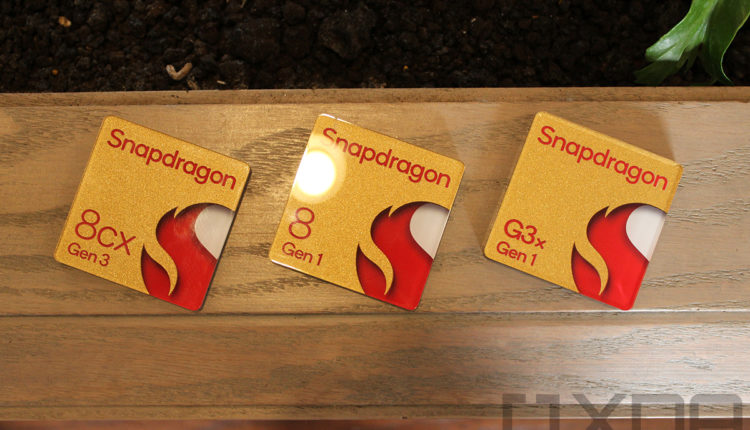 Qualcomm’s previous mobile SoC branding allowed buyers to easily differentiate between a high-end Snapdragon SoC and a mid-range or entry-level SoC. However, it can be a bit difficult for the average user to distinguish between SoCs in the same series. That’s because Qualcomm has changed the naming convention quite a bit in recent years, introducing a wider variety of products within each Snapdragon series.

If you’re still confused about the names and branches, here’s what Qualcomm’s current Snapdragon lineup looks like.

Qualcomm’s new naming convention in the future keeps the “8” as a means of designating a flagship, while omitting the random numbers at the end. Instead, we now have generations of “8” series chipsets, and the same should be true for lower performance chipsets. That means we should probably see a Qualcomm Snapdragon 7 Gen 1, Snapdragon 6 Gen 1 and a Snapdragon 4 Gen 1. That in itself is relatively easy to understand and logical, especially in comparison with the previous system.

Under the previous system, it was widely believed that a higher number meant a better chipset, but there were a few exceptions to this rule. For example, the Snapdragon 480 5G was released just a month after the Qualcomm Snapdragon 678, but it featured a higher clock speed and a better GPU among other improvements. Since the new naming scheme will easily allow Qualcomm to introduce another chipset marking that is a “lite” or “pro” version, it should clear up some of that confusion. Admittedly, it’s also not impervious to its own pitfalls, and may not completely resolve that confusion between different chip setups.

Is this the best way to name Qualcomm’s chipsets in the future? There are probably shorter ways to refer to them, and even if Qualcomm hasn’t officially named them that way, the community will likely come up with their own nicknames for these chipsets, like “Snapdragon 8.1” for example, or “Snapdragon 8g1”. Anyway, it’s just a chipset in your phone. Most consumers don’t care what the chipset is called, and if it fixes some issues with inconsistent naming, Qualcomm has accomplished something with this rebranding. However, the chipset is a sum of several parts and Qualcomm has several other parts on the SoC.

Qualcomm hasn’t changed its modem naming scheme for a long time, and the new Qualcomm modems are typically announced earlier in the year than the chipset they’ll integrate with. The company has kept the same X** naming scheme since it released its first 5G modem, the X50, increasing it by five each time. These chips are also paired with mmWave modules, with the X65 paired with the QTM545. These are increased by 10, as the X60 (last year’s 5G modem) was paired with the QTM535. To our knowledge, this has not changed.

This is where things get more confusing. The Snapdragon G3x Gen 1 is Qualcomm’s gaming chipset at the heart of the handheld developer kit co-produced with Razer. Personally, I’d say I believe the “G” stands for gaming. Gen 1 clearly refers to the chipset generation… but where does the “3” come from? We asked Qualcomm and although it was confusing, we understood the company’s intentions. It’s a layered system half inspired by his computer division. We can expect the following chips:

The Snapdragon G1 chip will be used for very basic functions, for example streaming devices. The G2 is a more entry-level product, the G3 is more mainstream in the middle of the pack, and the G3x is a premium product. The “x”, as in Qualcomm’s computer divisions, stands for “eXtreme”.

This is Qualcomm’s latest flagship chipset for the PC market. Usually the name “c” indicates that this is a computer chipset, and the 8 denotes it as a flagship. This is the third generation of the chipset, as Qualcomm has been working with this naming scheme in the computer for quite some time. It’s a pretty easy system to understand, apart from the “x” designation. The “x” actually means “eXtreme”, and refers to the top-of-the-line chipset.

As for the Snapdragon 7c+ Gen 3, this is where it gets a little confusing. It’s a brand new chipset, despite what the “+” would have you believe. The Snapdragon 7c+ Gen 3 is a completely new design compared to its predecessor. The reason it is being called the 7c+ instead of the 7c is that the Snapdragon 7c Gen 2 will still be sold, further adding to the confusion. In general, however, the 7 series of these chipsets are more mid-range, and the plus would usually mean improvements over the regular, non-plus version. The marketing team should definitely think about this.

XR means “eXtended Reality” and is mostly used in virtual reality headsets. A prime example of this is the Oculus Quest 2, which packs in a Snapdragon XR2 chipset. These XR chipsets have a number of optimizations focused solely on virtual reality, including support for multi-camera processing, high-precision motion tracking, 360° video support, and much more. These are mostly based on mobile chipsets and the original XR was based on the Snapdragon 835. The XR2 is based on the Snapdragon 865.

Qualcomm’s Snapdragon Ride has also dropped the “Qualcomm” part of its name, but has kept the rest of its naming strategy. It still doesn’t quite match up with other platforms in naming, but it’s a step away from including the “Qualcomm” part in the chipset name. These chipsets are not yet immensely popular anyway and will only be released in selected cars from 2023.

Qualcomm’s name change is a welcome move, at least on the mobile side of it, as things started to get confusing and Qualcomm was running out of numbers in the series. But as you can see, there’s still room for uniformity in how the whole Snapdragon branding could look. Will that uniformity ever be achieved? That’s something we can’t answer, and something that may not even be necessary, given that Qualcomm essentially serves as a B2B brand and doesn’t sell a single chip directly to an end user. Still, cohesive branding indicates a vision for the future, and the branding targets end consumers for goodwill and reputation building. So we’d like to see something even more consistent and easier to follow across the board.