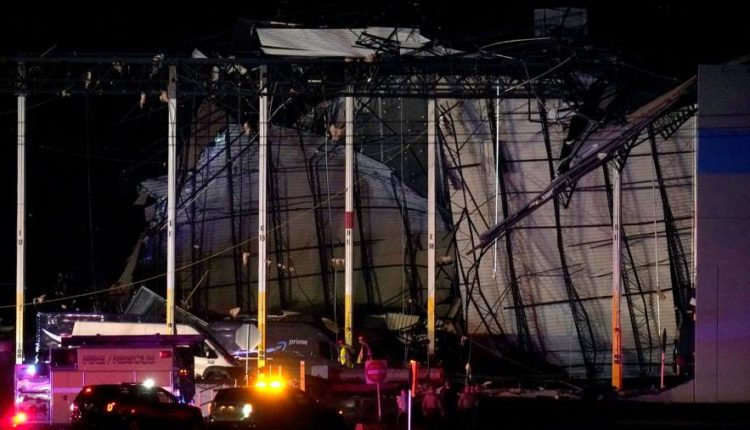 Tornadoes have swept through six US states, killing more than 70 people in Kentucky and destroying an Amazon facility in Illinois, officials said.

Kentucky Governor Andy Beshear described the tornadoes as the worst in state history. The main storm passed through Kentucky for more than 227 miles, he said.

“It’s been one of the toughest nights in Kentucky’s history and some areas have been affected in ways that are hard to put into words,” Beshear told a news conference on Saturday. He added that the death toll in the state could be approaching 100.

The town of Mayfield was “devastated,” he said. A roof collapse at a candle factory had resulted in massive casualties. Tens of thousands were without power and Beshear declared a state of emergency and activated the National Guard.

Wreckage in Mayfield, Kentucky on Saturday after a tornado ripped through town overnight. © Getty Images

President Joe Biden gave federal aid to Kentucky, tweeting that the loss of life was “an unimaginable tragedy.”

In a later press conference, he said the disaster showed why coordinated global action on climate change was needed. But the first priority, he added, was to get help to those most affected.

“Whatever is needed, the government will provide it,” he said.

The cause of the tornadoes appeared to be a series of nighttime thunderstorms, including a large one that formed in northeastern Arkansas and moved further into Missouri and into Tennessee and Kentucky.

A tornado hit the Amazon facility in the city of Edwardsville Friday night. Officials said on Saturday there were at least six confirmed fatalities.

At least 100 emergency vehicles drove to the site after a wall the length of an American football field collapsed, according to local media reports.

According to data from logistics analyst MWPVL, the Edwardsville facility, about 20 miles from St. Louis, is a 700,000-square-foot “non-sortable” fulfillment center.

Such buildings typically employ about 1,000 workers, according to Amazon’s website, although this can be significantly more during the peak Christmas season.

“The safety and well-being of our employees and partners is our top priority right now,” said Amazon. “We are assessing the situation and will share additional information when it becomes available.”

Dave Clark, the Amazon executive in charge of its fulfillment network, said on Twitter, “Thoughts and prayers go out to our team in Edwardsville tonight and thank you to all first responders.”

Edwardsville Police Chief Mike Fillback said it was unknown how many people were in the building at the time of the collapse.

“This is a fairly new building, so it’s not something we’re used to seeing,” he added, speaking to CBS affiliate KMOV.

Two people from the site were helicoptered to the hospital and about 30 employees were taken by bus to a nearby police station for evaluation, the Associated Press said.

“My prayers are with the people of Edwardsville tonight, and I have contacted the mayor to provide all necessary state resources,” Illinois Governor JB Pritzker said in a tweet.

Redmi Note 11 4G Global Variant with Snapdragon 680 Leaked, to be Cheaper than Realme 9i