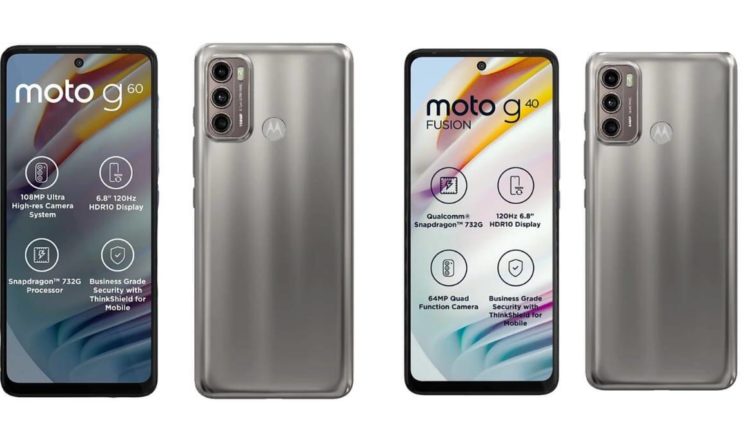 Motorola has launched two new G-series smartphones; the Moto G60 and Moto G40 fusion that are said to be the first “made for India” devices. Both devices are powered by the Qualcomm Snapdragon 732G SOC. Moto G60 is one of the cheapest smartphones in India with a 108 MP camera setup.

Let’s take a look at everything you need to know about these smartphones.

The Moto G60 comes with a 6.8-inch FHD + HDR10 display with support for a 120Hz refresh rate. The device is powered by a Qualcomm Snapdragon 732G and 6 GB of RAM. The smartphone has a 6000 mAh battery, runs on Android 11 and offers Motorola’s signature Android experience that is almost out of stock.

The smartphone features a 108 MP primary camera with f / 1.7 aperture, along with an 8 MP ultra-wide angle sensor with f / 2.2 aperture and a 2 MP depth sensor with f / 2.4 aperture. The 108MP camera supports Ultra Pixel technology which is said to improve light sensitivity for better low light shooting by combining 9 pixels into one large 2.1um Ultra Pixel. The 8 MP wide-angle camera has an additional mode that can be used to take macro shots from the camera.

The smartphone supports a Dual Capture mode that allows users to capture images with both the rear camera and the selfie camera simultaneously. There is a 32MP Quad Pixel front camera for all your selfie needs. The device has 128 GB of internal memory and features an expandable memory slot that allows users to expand storage up to 1 TB using a micro SD card.

The Moto G40 Fusion, meanwhile, comes with a 6.8-inch FHD + HDR10 display that supports a 120Hz refresh rate and is powered by the Snapdragon 732G SOC along with 4GB or 6GB of RAM.

Both devices come with a water-resistant coating that would protect the smartphones from accidental splashes. The Moto G60 and Moto G40 merger feature Motorola’s proprietary ThinkShield for mobile, which reportedly provides business security to users.