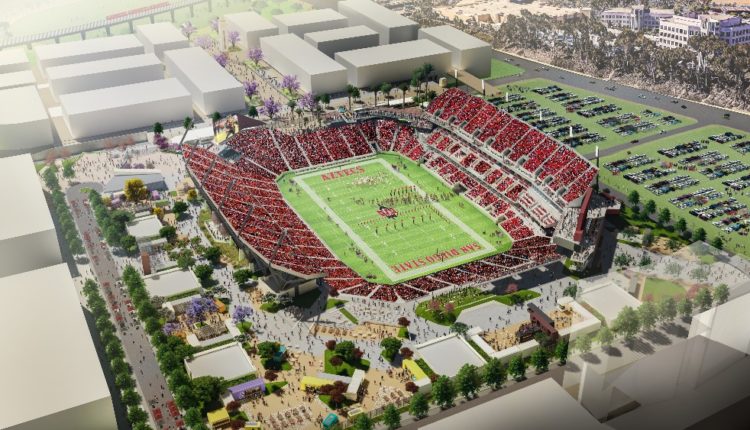 A view of the completed Snapdragon Stadium. Thanks to SDSU

The university announced Monday that the 35,000-seat arena will be named “Snapdragon Stadium,” after the Qualcomm-designed processor that powers many of the world’s most advanced smartphones.

“We are delighted to have secured exclusive naming rights to San Diego State University’s new stadium, Snapdragon Stadium. Snapdragon stands for premium experiences and industry-leading performance, which is what fans can expect from this new state-of-the-art venue,” said Cristiano Amon, president and CEO of Qualcomm.

Amon said Qualcomm would work with the university to support advanced communications technology at the new Mission Valley campus. “This agreement is a reflection of our mutual commitment to our local San Diego community,” he said.

Officials noted that the naming is tinged with nostalgia as Snapdragon Stadium replaces Qualcomm Stadium, which was demolished after the Chargers left San Diego.

“Qualcomm is recognized and respected not just here in San Diego, but worldwide,” said SDSU President Adela de la Torre. “Our partnership with Qualcomm Technologies represents a shared vision for a fully smart stadium – the cornerstone of what will be a uniquely smart campus – that will enrich, educate and empower those we serve here locally and around the world.”

The stadium is scheduled to be completed on September 3, 2022, when the Aztecs are scheduled to play the University of Arizona Wildcats in the home opener of the football season.

The $45 million naming agreement is structured as a 15-year, $3 million-per-year agreement and requires formal approval by the California State University Board of Trustees.