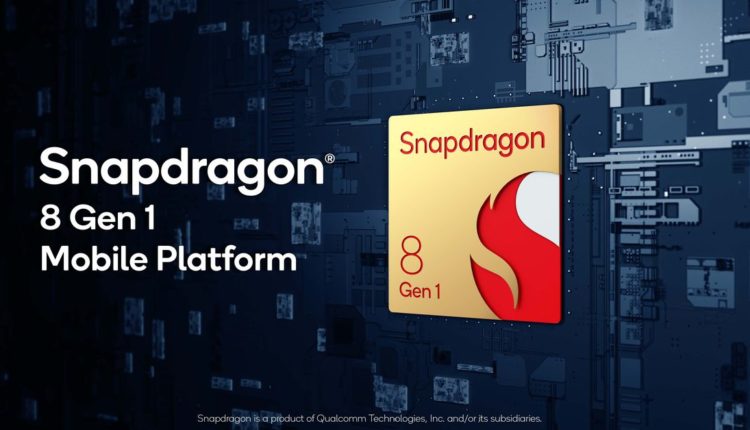 Qualcomm has announced a new flagship smartphone processor, the Snapdragon 8 Gen 1, at the company’s annual Snapdragon Tech Summit, and gives an early preview of the brains behind the most powerful smartphones of 2022.

The successor to last year’s Snapdragon 888, the Snapdragon 8 Gen 1 is the first chipset to bear Qualcomm’s new naming scheme (which the company had previously teased last week), replacing the three-digit numbering system Qualcomm has previously used. for new generation-based names.

Like every year, Qualcomm promises some major improvements in the Snapdragon 8 Gen 1, with better performance, camera technology, AI capabilities, security and 5G.

Let’s start with the hard specs. As expected, the Snapdragon 8 Gen 1 is Qualcomm’s first chip to use Arm’s latest Armv9 architecture. Specifically, the new eight-core Kryo CPU will feature a single primary core based on the Cortex-X2 at 3.0 GHz, along with three performance cores based on Cortex-A710 at 2.5 GHz, and a quartet of efficiency cores based on the Cortex-A510 design at 1.8 GHz. In addition, the new chip jumps to a 4nm process, from the 5nm process on which the Snapdragon 888 is built.

All told, Qualcomm promises that the Snapdragon 8 Gen 1 will offer up to 20 percent better performance and up to 30 percent more power efficiency than last year’s model.

Meanwhile, the new Adreno GPU (like the Gen 1’s Kryo CPU, no specific number for the updated hardware here) promises to deliver 30 percent faster graphics performance, in addition to 25 percent better power efficiency compared to the Snapdragon 888. It will also offer a new GPU control panel for fine-tuning how games run on your phone.

Making its debut on the Snapdragon 8 Gen 1 is Qualcomm’s Snapdragon X65 modem, which promises a slew of 5G features and firsts. As Qualcomm’s fourth-generation 5G modem, it builds on the existing mmWave and sub-6GHz compatibility that existed before, with support for speeds up to 10 Gbps and the latest 3GPP Release 16 specification. As is always the case, you almost certainly won’t see that kind of speed in the real world.

As is traditional for Qualcomm’s flagship processor, the company is placing great emphasis on its enhanced camera capabilities, which the company is bundling for the first time under a new “Snapdragon Sight” brand.

While the Spectra ISP is again a triple ISP system, the Snapdragon 8 Gen 1 upgrades things to an 18-bit system (from 14-bit on the 888). That translates to 4,096 times more camera data and up to four additional stops of dynamic range for very bright or very dark scenarios. The triple ISP (Image Signal Processor) also makes it possible to take 240 12-megapixel photos in one second or simultaneously shoot in 8K with HDR and capture 64-megapixel photos thanks to an increased throughput of 3.2 gigapixels per second.

Qualcomm also offers more high-end camera features out of the box, including support for shooting in 8K video with HDR 10 Plus and shooting in 18-bit RAW (assuming your phone has the camera hardware to actually get it done).

The 8 Gen 1 also offers a number of other image enhancements, including better photos in dark mode that can use data from up to 30 images in a single shot (versus six images on the 888). There’s also a host of better AI processing techniques, with improved autoexposure, autofocus, and auto-face detection technology, a special “bokeh engine” for adding portrait effects to 4K video, and an “ultrawide engine” that warp and remove chromatic aberrations of images.

Qualcomm is also adding a fourth ISP, located in the dedicated detection hub on the SoC: unlike the triple ISP for the primary camera, the new ISP is specifically designed to power an always-on camera that is always on. is active. Qualcomm has some big ambitions for what developers can do with the always-on camera, like turning your screen off automatically when you put your phone down or detecting someone trying to read over your shoulder.

Still, the added capability — and how manufacturers implement it in their devices, if at all — will be something to look at when the first chips with the Snapdragon 8 Gen 1 roll out.

On the AI ​​side, the Snapdragon 8 Gen 1 is equipped with Qualcomm’s latest Hexagon processor, with its seventh-generation AI engine, which the company claims is four times faster than its predecessor and up to 1.7 times. more energy efficient.

The company showcased a variety of usage scenarios that enable the enhanced AI performance, including the aforementioned camera functionality, a “Leica Leitz Look Mode” that emulates Leica lens effects, and improved detection of where you hold your phone to optimize the antenna. performance. In addition, Qualcomm adds AI-powered sampling to provide a DLSS-like effect for enhancing mobile games, something that is said to happen automatically when gaming on the 8 Gen 1.

Finally, there are security improvements. The Snapdragon 8 Gen 1 adds a new hardware-level layer of security with a “dedicated Trust Management Engine”, in addition to providing support for the Android Ready SE standard, bringing support for digital car keys, driver’s licenses, IDs and e-money wallets. There is also built-in iSIM support for direct connection to mobile networks.

Despite the new branding, the Snapdragon 8 Gen 1 doesn’t seem to break the mold for Qualcomm chips, offering the usual generational upgrades we’ve come to expect from the company’s annual flagships. But in a world where custom chips like Google’s Tensor or Apple’s A-series processors are gaining in popularity, it’s good to see Qualcomm’s no intention of slowing down the pace on its own top chips, even as the competition heats up.

And with the first Snapdragon 8 Gen 1 smartphones expected before the end of 2021, it won’t be long before we can see for ourselves just how powerful Qualcomm’s latest chip is.