Snapdragon vs. MediaTek: What’s the Difference? 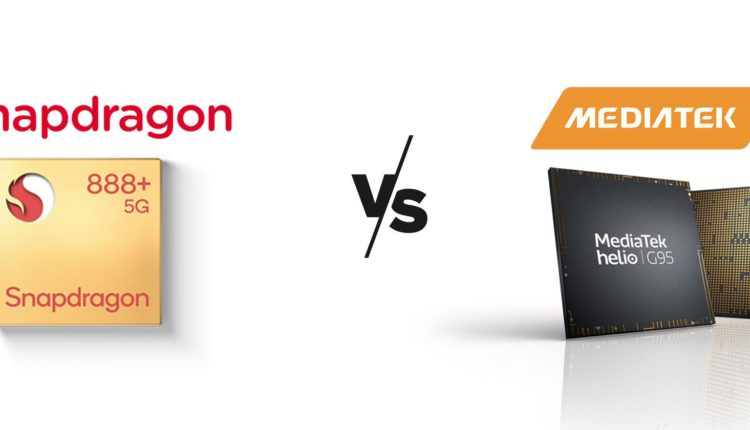 Just as Intel and AMD are the top two choices of PC processors, MediaTek and Snapdragon are the top CPU choices for smartphones.

Due to the complexity of the shrinking computer chips, only a few smartphone brands are producing their own hardware. Instead, most chipsets from a number of semiconductor manufacturers integrate.

At the end of this article, you will understand the differences between MediaTek and Qualcomm’s Snapdragon. More importantly, when you want to buy your next phone, know the terminology to make the best purchase decision.

While there are regional differences, Qualcomm and MediaTek continue to expand their chipset footprint on a global scale. According to Counterpoint Technology Market Research, the breakdown is as follows.

As you can see, much more expensive Apple smartphones dominate the North American market, with some success in Europe. On the other hand, affordable Android smartphones dominate the rest of the world, represented by two colors: blue Qualcomm and yellow MediaTek. In addition, China has its own chip-making ecosystem, led by HiSilicon, which is owned by Huawei.

Qualcomm and MediaTek have been so successful because they offer the same app-powered functionality within much wider price ranges. Moreover, more and more people are looking for smartphones with gaming capabilities. This requires higher refresh rates (60 Hz, 120 Hz, 144 Hz) and higher clocked GPU chips.

However, it’s important to understand how their chips are built before we get into the differences between Qualcomm’s Snapdragon and MediaTek.

System on a Chip (SoC) as a mobile platform

Because everything has to fit effectively within the size of a credit card, microprocessors are integrated on a System on a Chip (SoC) printed circuit board. The first such integrated circuit was developed all the way in 1958 by Jack Kilby. However, the modern SoC is much more advanced and combines the following core elements:

On a PC, you can swap out the GPU, CPU and RAM, and even your motherboard. However, a mobile SoC uses an integrated design to save space, so even upgrading memory is impossible. SoCs are drastically more energy efficient and compact – exactly what a smartphone needs.

Therefore, when we talk about smartphone performance, we cannot distinguish between CPUs and GPUs, as is common when discussing PCs and other desktop computers. With all key components integrated, we have to rely on the manufacturer to provide us with the best combination that meets our needs at the price we can afford.

Not many people know that Qualcomm acquired AMD’s Handheld Graphics and Multimedia Assets in 2009. As a result, what we know today as Adreno is an anagram of Radeon – a tribute to AMD’s legacy. While Snapdragon is Qualcomm’s SoC solution, the Adreno GPU became an integral part.

Accordingly, when you look up the performance of smartphones, you always see two parts: the SoC series and GPU series. For example, the current best performing Snapdragon chipsets are:

You will find all these models in the top 10 performing smartphones. Their prices vary depending on the manufacturer and RAM capacity. The higher the serial number, the better the phone will perform and the more expensive it will be.

Likewise, the smartphones with hardware from the series under the Snapdragon 865, the Snapdragon 860/Adreno 640, should cost less than $300. The Snapdragon 600 and 700 series are for budget-minded customers, while the Snapdragon series 800 represents flagship phones with all the bells and whistles you could wish for – from multiple cores and cameras to top-notch gaming performance.

This Taiwanese company started its technology journey with DVD players and TVs and expanded into wireless SoC solutions. After March 2021, MediaTek surpassed Qualcomm as the global chipset vendor for smartphones. In 2020 alone, it shipped more than 350 million chipsets to various smartphone companies.

MediaTek’s line of SoCs is called Helio, known for its multiple cores for better background performance. You will often see them as Hexa (6), Octa (8) or even Deca (10) cores for flagship phones. Mediatek’s GPU solution is a third party called Mali. Accordingly, top phones with MediaTek chipsets will have the following series:

Unlike the Snapdragon series, even the highest-end MediaTek chipsets are budget-oriented, all available for less than $300.

While Snapdragon chipsets regularly fill the top 10 of smartphone performance rankings, the best MediaTek SoCs rarely top the top 20. That is, when Huawei’s Kirin, Samsung’s Exynos and Apple’s A-series are added to the mix. Keep in mind that Kirin and Exynos SoCs also have configurations with Mali 3rd party GPUs.

With these combos, they are quickly taking off as top performing phones. Particularly those with Exynos 2100 (Mali G78 MP14) or Kirin 9000 (Mali-G78 MP24) configuration. On the other hand, Snapdragon 888 (Adreno 660) outperforms both, left behind only by Apple’s latest A14 Bionic and A13 Bionic.

MediaTek’s top offering – Helio G95 (Mali-G76 MC4) – even lags behind the Snapdragon 835 (Adreno 540), which was released four years ago. However, affordability is key to MediaTek’s increasing international success. It may not have the horsepower to compete with Snapdragon, but it wins in the bang for the buck.

Apps are so powerful that they already make some modern devices irrelevant.

Rahul Nambiampurath started his career as an accountant but has now transitioned to working full time in the tech space. He is an avid fan of decentralized and open source technologies. When he’s not writing, he’s usually busy making wine, tinkering with his Android device, or hiking in the mountains.