US warns Russia could invade Ukraine in early 2022 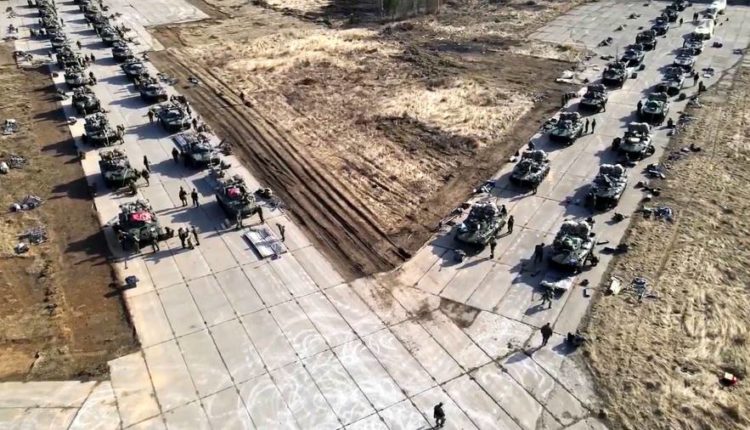 Vladimir Putin and Joe Biden will hold a phone call next week amid heightened military tensions on the Russia-Ukraine border, with Washington warning Moscow could launch an invasion in early 2022.

The two presidents will speak on Tuesday, after a meeting this week between top US and Russian diplomats, where warnings were exchanged about the military situation at the border.

The Kremlin has repeatedly denied it plans to attack, calling the warnings inflammatory.

The US warned Friday night that Russia could be planning to invade Ukraine “as soon as early 2022” with an estimated 175,000 troops.

A Biden government official said Moscow’s plans “call for a military offensive against Ukraine as soon as early 2022 with a force size twice what we saw last spring during the rapid military build-up of Ukraine.” Russia near the borders of Ukraine”.

This would include “extensive movement of 100 tactical battalion groups with an estimated 175,000 personnel, along with armour, artillery and equipment”.

According to the government official, half of the units were already near the border with Ukraine after arriving last month. Russia had already started building a “ready reserve of contract reservists” to prepare for the offensive.

Before heading to the presidential retreat at Camp David on Friday night, Biden said: “We have been aware of Russia’s actions for a long time and I expect we will have a long discussion.”

Details of the US assessment of Russia’s plans, first reported by The Washington Post, emerged a few hours after Biden said he was in “continuous contact” with European allies and Ukraine about the threat. He warned that he would try to stop Putin from implementing these plans, hinting at punitive measures.

“What I do is bring together what I believe . . . will be the most comprehensive and meaningful set of initiatives to make it very, very difficult for Mr Putin to go ahead and do what people fear he will do,” the US president said. “But that’s in play now,” Biden added.

The National Security Council said Washington was “deeply concerned about evidence that Russia was stepping up its plans for significant military action against Ukraine” — noting that this had been discussed this week by US Secretary of State Antony Blinken during a trip to Europe.

“The Biden administration has been consistent in our message to Russia: The United States does not seek conflict, and the best way to avoid a crisis and spiraling downward in the wider relationship is through diplomacy and de-escalation.” according to the NSC.

The strength of US intelligence assessments has taken some European officials by surprise, and authorities on both sides of the Atlantic have spent weeks comparing and contrasting their assessments. The Biden administration is trying to signal the risks of an invasion of Ukraine as part of a diplomatic effort to dissuade Putin from taking action.

A US defense official told the Financial Times last week that the Biden administration was considering supplying arms to Ukraine, but talks between the agencies continued and no decisions had yet been made.

The official said the US was “aware of what we are seeing” close to the Ukrainian border, and that supplying weapons would help Ukrainians defend themselves if attacked.

Earlier on Friday, a government official said: “Since the inception of this administration, we have demonstrated that the United States and our allies are willing to use a number of tools to deal with damaging Russian actions, and we will not hesitate to use them and other tools in the future.”

How is the Qualcomm/Nuvia acquisition going? – SemiAccurate